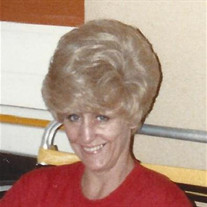 Carolyn "Billie" Durden, age 71 passed away Monday, August 8, 2016 at her home in Grant, Alabama. Billie was born in Guntersville, AL; the daughter of late Eudora Chandler Cranfill and the late William O. Cranfill. She was proceeded in death... View Obituary & Service Information

The family of Mrs. Carolyn "Billie" Durden created this Life Tributes page to make it easy to share your memories.

Send flowers to the Durden family.