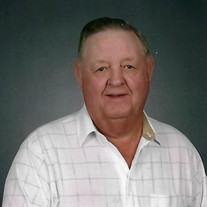 Claude Henry Campbell, 84, passed away peacefully on March 30, 2022 at Huntsville Hospital Hospice Family Care. He was a member of Hampton Cove Church of Christ. He was born on July 8, 1937 in Grant, Alabama and grew up in the Mt. Shade community. He is survived by his wife of 67 years, Dorothy Bevel Campbell; three children, LaBronn Campbell (Cathy), Tony Campbell (JoJo), and Alan Campbell (Michelle), all of Huntsville; seven grandchildren – Mark Campbell, Shane Campbell (Brooke), Amery Dawn Freeman (Forrest), Halea Vonderheide (Joe), Lindsey Dardin, Conway Campbell (Casey), Shelby Campbell (Josh), and six great grandchildren – Abby and Stella Campbell, Jack Buchanan, Bryce and Jeanne Lou McGahey, and August Campbell; nephew Dr. Michael Campbell (Lisa). He was preceded in death by his parents Zelma May Jones and Ira Jerdon Campbell, brother James (Brownie) William Campbell, sisters Geraldine Campbell Kirkland, and Julie Campbell Tucker. Claude was a hard worker all of his life. He and Dorothy were married at the age of seventeen, and he worked every job he could find to support his growing family. In 1965 he began managing a Texaco station at night, and in 1969 he became a consignee for Texaco. In 1975 he became a distributor for Texaco products and formed Campbell & Sons Oil Co., which became one of the largest distributorships in the state of Alabama. He retired in 1989 at 52 years old, leaving his sons in charge of the business. In retirement, he and Dorothy spent many winters in Florida playing golf. They also bought land back in Grant and started a cattle farm called CC Ranch. He was in the cattle business for 17 years and sold out in 2005. He was a gun and knife collector and enjoyed hunting trips with his sons and nephew, as well as many vacations with Dorothy. Over the years, they made close friendships from near and far that remain with them today. Due to a heart condition, Claude attributed his long life to his cardiologist and nephew, Dr. Michael Campbell. From the time Michael graduated from medical school he oversaw Claude’s care and medical treatments. Claude always considered him more like a son than a nephew. He leaves a lasting legacy with his family and friends and encourages everyone to live by his motto “If you can’t be on time, be early.” Visitation will be from 12:00 – 2:00 p.m. on Friday, April 1st with service to follow at Grant Memorial Chapel. Bro. Bro. Keith Hodges and Bro. Harold Kelly are officiating. Burial will be at Free Home Cemetery immediately following service. Pallbearers will be Mark Campbell, Shane Campbell, Matthew Campbell, Conway Campbell, Joe Vonderheide, Richard Mayhall In lieu of flowers, Claude requested that you help a family in need in his memory. Arrangements Entrusted to Grant Memorial Chapel

Claude Henry Campbell, 84, passed away peacefully on March 30, 2022 at Huntsville Hospital Hospice Family Care. He was a member of Hampton Cove Church of Christ. He was born on July 8, 1937 in Grant, Alabama and grew up in the Mt. Shade community.... View Obituary & Service Information

The family of Mr. Claude Henry Campbell created this Life Tributes page to make it easy to share your memories.

Send flowers to the Campbell family.