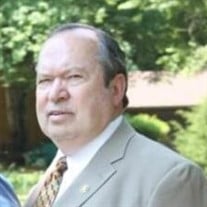 One of Grant Mountain's favorite sons passed away on January 6, 2022 at his home in Grant Alabama, surrounded by his loving family. A native of the area, David Myrle Willmon has been a fixture in the Grant Community most of his life. He was born on September 18,1942 and raised in the Swearengin and Grant communities and attended school at New Prospect and DAR. David Myrle was employed at the Piggly Wiggly in Guntersville Alabama after finishing his education. Next he began, what was to become his lifelong professional banking career, in Guntersville at the Citizens Bank in 1961, working for Dr. Owen Couch. David Myrle continued his career as Vice President of Peoples State Bank, then was employed at the Bank of Fyffe working alongside his older brother Charles Willmon before returning to Grant in 1979. He and his family became owners of Peoples State Bank where he served as Chairman, President and CEO for many years, eventually retiring and continued to live in his hometown of Grant. While being Chairman of the Board and President, he served on basically all the area civic boards, including the Marshall County Hospital Board. His support of the DAR School throughout the years was extensive and was closely involved with the sports programs at the school. Also, with his tenure in Fyffe, he was involved with the city’s early development, including serving on the town council among other civic organizations. He and Charles organized Fyffe Holiness Church in 1974, where he served as treasurer, trustee, deacon and elder during his time there. After retiring from Peoples State Bank for some 10 years, he returned to work for First Bank of the South as City President at the Grant office and worked until 2017. He was a distinguished member of the Alabama Bankers Association, serving on several committees and boards throughout his banking career. Notably receiving membership into the prestigious “Fifty Years” Club recognizing his accomplishment of 50 years in the banking industry in Alabama. It is worthy to note, he and his brother Charles both received this honor, and were recognized the same year. David Myrle was a natural bass singer, as anyone could tell by hearing him talk. He was a founding member of the Crimson Quartet and sang with the Willmon family making several recordings over the years. He also sang at funerals in the North Alabama area with the family and the Roy Guffey Singers. Some of his favorite pastimes were spending time with his family, arts and crafts, fishing and singing in the church choir. David Myrle and Mildred also enjoyed traveling and was afforded the opportunity to travel extensively in the United States and abroad, mostly with his brother and sister-in-law Charles and Martha Willmon. David Myrle received Christ in 1965 and was a lifelong member of Oak Grove Holiness Church in Swearengin, where he also served as an Elder and Trustee. David Myrle will be greatly missed by all those of the Gunter's Mountain area and will be remembered as one of its most accomplished native sons. David Myrle was preceded in death by his parents: L.D. and Cuba Morrow Willmon of Swearengin; infant sister, Reba Willmon of Swearengin; and brothers, Lawrence O’Neal "Neal" Willmon of Swearengin and Charles L. Willmon of Scottsboro. He is survived by his wife, Mildred Martin Willmon; daughter, Suzanne Marie Willmon; sons, Christopher Leon Willmon and Timothy Lee Parmer (Beth); grandchildren, Maegan Willmon (Orlando McRae), Emily Daugette (Cody), Trever Willmon (Alex), Lindsey Patterson (Bo), Robert Atchley Willmon, Mary Beth Parmer, and Luke Parmer; 11 Great Grandchildren; brothers, Alton Willmon (Helen) of Swearengin, Verlon J. Willmon (Judy) of Guntersville, and Dwight Willmon (Karen) of Guntersville; sisters, Martha Willmon Higdon (James) of Swearengin and Maxine Willmon Byrum (Tim) of Section; and sister-In-Law: Martha Gamble Willmon of Scottsboro. Funeral services will be held at 2 p.m. Sunday, January 9, 2022 at Oak Grove Holiness Church with Rev. Nicky Willmon and Rev. Ollie Taylor officiating. Friends may visit with the family on Saturday at Grant Memorial Chapel from 5-8 p.m. The body will lie-in-state at the Oak Grove Holiness Church on Sunday from noon until time of service. A private family graveside service will be held at Gunter Mountain Memory Gardens in Swearengin.

One of Grant Mountain's favorite sons passed away on January 6, 2022 at his home in Grant Alabama, surrounded by his loving family. A native of the area, David Myrle Willmon has been a fixture in the Grant Community most of his life. He was... View Obituary & Service Information

The family of Mr. David Myrle Willmon created this Life Tributes page to make it easy to share your memories.

One of Grant Mountain&#39;s favorite sons passed away on January...

Send flowers to the Willmon family.