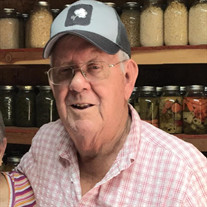 Don was born in Gadsden, Al. to Marcus and Nell King Irwin on April 19, 1941. His father died of cancer when he was 18 months old. His mother remarried Ervin Johnson and they moved to Cullman Co. where they farmed. In 1955 they bought a farm near Grant and he went to DAR and played basketball for them. He was moved to varsity in 9th grade. He met  his future wife Faye Davis at the “swimming hole” for all the local kids and grown ups, at the time near Columbus City, in 1956. They soon started dating and were married on January 24, 1959 and have been best friends for 62 years. He got a job at the Times Journal then returned near Grant where he and his sister in law commuted until he got on at the Huntsville Times in 1962. He worked for The Times 38 years, for a total of 41 years in the newspaper business. He worked in the composing room all of the time except about the last two yrs. When he decided how many pages the paper would have and laid it out. He retired on August 1, 2001. He and Fay traveled quite a bit to the West Coast where her sister lived and to Canada where Fayes sister in law had a cottage on the lake. They built their house on Dug Hill Rd in 1965 and lived there for 57 years. He was always content whether he was at home or traveling, He was at his happiest being with his wife, children, grandchildren, great grandchildren and extended family. A friend in Iowa said if you could get along with Don, you couldn't get along with anyone. He gave many tractor and wagon rides to his kids, grandkids, nieces, nephews, and neighbor kids. He was good to all of them. He use to load them up on his pick up and take them to the store for candy and ice cream. He would also load all of them up and take them to a movie, car race or swimming. He was very patient with all of them. Don also loved to play volleyball, horseshoes and checkers which he was very good at. He loved country and Bluegrass music and enjoyed picking his banjo. Don enjoyed wood carving and he and Faye used to travel to Missouri every March for a woodcarving seminar at Silver Dollar City. Don was a very good driver and was always the "designated" driver on road trips. Their house was always the gathering place and they used to feed 20-25 family and friends about every Sunday. He would grill turkey ham, pork butts, hamburgers, hot dogs, or steaks, deep fry chicken or fish and hushpuppies and fries. He always fixed plenty and there were lots of "to go" plates. One friend said if you left here hungry it was your own fault. Visitation for Mr. Don Irwin was held on Monday, April 5, 2021 from 10:00 - 11:00 am at Grant Memorial Chapel with funeral services followed at 11:00 with Rev. Mike Shaneyfelt officiating. Interment was in Free Home Cemetery in Grant, AL. Mr. Donald Eugene Irwin, Sr. is survived by his wife of 62 years, Faye Davis Irwin; Children, Donald Eugene Irwin, Jr.(Kelly Ann), Marcus Craig Irwin (Stephanie), Kelly Faye Irwin Walden (Russell) and Phillip Bradley Irwin. Grandchildren, Brett Tyler Ayers, Misty Irwin Bellomy (L.J.) Ashley Ayers, Dylan Irwin, Nathan Irwin (Abby) and Brad Irwin. Great Grandchildren, Tylei, Tatum and Shia Ayers, Gavin and Hudson Bellomy. Mr. Irwin is preceded in death by his parents, Marcus and Nell King Irwin; brother, Jack Irwin; Step-brother Carl Dee Johnson, step-sister, Reba Vaughn and one great-grandson.

Don was born in Gadsden, Al. to Marcus and Nell King Irwin on April 19, 1941. His father died of cancer when he was 18 months old. His mother remarried Ervin Johnson and they moved to Cullman Co. where they farmed. In 1955 they bought a farm... View Obituary & Service Information

The family of Mr. Donald Eugene Irwin Sr. created this Life Tributes page to make it easy to share your memories.

Don was born in Gadsden, Al. to Marcus and Nell King Irwin on...

Send flowers to the Irwin family.