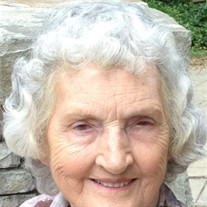 Erlene Tribble Hayes, 90 years old, died on Saturday, October 24, 2015 at her residence in Grant, AL. Her strong will to live, unwavering faith and the love and prayers of family and friends sustained her through her latter years which were often filled with pain and illness. Erlene was born November 12, 1924 to Bertha and Hopkins T. Tribble., She was one of eight children and felt so blessed to be part of an amazing familywho loved and supported each other throughout their lives. Erlene exemplified a life which was filled with the fruits of the Spirit: love, joy, peace, long-suffering, kindness, goodness, faithfulness, gentleness and self control. She was maried for 69 years to Oran Hayes and served by his side as a pastors wife for 40 of those years. She faithfully cared for family and friends through her delicious cooking and gentle spirit. She was quietly strong and exhibited a surprising sense of humor. Her loving and kind spirit will greatly missed by all who knew her. Mrs. Erlene Tribble Hayes, Age 90, passed away Saturday, October 24, 2015 at her residence. Mrs. Hayes is a resident of Grant, Alabama and a member of the First Baptist Church of Grant.She was the daughter of the late Hopkins and Bertha Morris Tribble. Mrs. Erlene Tribble Hayes is survived by her husband of 69 years, Oran Hayes of Grant, AL. One son: Perry Noel (Suzanne) Hayes of Pettigrew, Arkansas. One daughter: Jane (Greg) Kearley of Lafayette, Louisiana. Grandchildren: Yassy (Tiffany) Cox of Fayetteville, Arkansas,Deionna McCarthy (Todd) Bartholemew of Fayetteville, Arkansas Brian McCarthy of Austin, Texas, Azalea Erlene (Tyler)Tolliver, of Huntsville, Arkansas, Jennifer (Desmond) Dupre` of Lafayette, Louisiana,Stephanie (Viktor) Muller of Karlsruhe, Germany. Great Grandchildren: Zinnia Hayes, Knox Tolliver, Amelia Bartholomew, Finley Hayes, Ava Dupre', Stella Dupre' and Nora Dupre`. Sister: Joyce Tribble Clanton Mrs. Erlene Hayes was preceded in death by her sister, Irene Cole; Brothers; Morris Tribble, Alonzo Tribble, Ray Tribble, Dean Tribble and Billy Tribble. Parents: Hopkins T. and Bertha Morris Tribble.

Erlene Tribble Hayes, 90 years old, died on Saturday, October 24, 2015 at her residence in Grant, AL. Her strong will to live, unwavering faith and the love and prayers of family and friends sustained her through her latter years which were... View Obituary & Service Information

The family of Mrs. Erlene Tribble Hayes created this Life Tributes page to make it easy to share your memories.

Send flowers to the Hayes family.