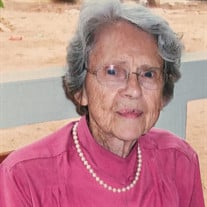 Thought to be the last living member of the DAR High School Class of 1936, Helen Page Whitaker of Grant died Monday, September 19, 2016 at South Hampton Nursing Home in Owens Cross Roads. She was 98. She was born to Frank Ervin Page and Myrtle Gayle Page near Woodville on August 23, 1918. In 1938, she married James Hazel Whitaker of Grant and lived in Grant for most of her life. She was an active member of the Grant Church of Christ until her health failed in 2011. Mrs. Whitaker was employed by the U.S. Postal Service at Grant as a part-time clerk in 1958 and was appointed postmaster of the Grant Post Office in 1971. She served as postmaster there until she retired in 1985 to spend more time with her grandsons. An avid gardener, Mrs. Whitaker's flowers were a delight to passersby every spring. She was also a great cook, using skills she mastered preparing meals for the DAR teachers at the teachers' residence facility in the late 1930s. She made biscuits from scratch seven days a week most her life, and her pies and homemade bread were a hit at any church or DAR School function. Mrs. Whitaker's main loves were always her church and her family. She was an early member of the Mt. Shade Church of Christ, which was later merged with the then-newly-relocated Grant Church of Christ. She was an elder's wife there and rarely missed a service--often teacher classes and visiting nursing home residents--until her health failed. Her grandsons lived in Atlanta, but Mrs. Whitaker and her husband visited regularly. She was delighted in 1995, when they moved to the north Alabama area so they no longer had to contend with Atlanta traffic. Her grandsons enjoyed their regular visits to the "farm." She was equally devoted to her 3 great grandchildren. She is survived by her son, Roger Page Whitaker (Debbie); 2 grandchildren, Matt Whitaker (Lauren) of Jacksonville and Stuart Whitaker (Lillie) of Huntsville; and 3 great grandchildren, Dylan Whitaker, Ava Johnson, and Caroline Page Whitaker. Mrs. Whitaker was preceded in death by her husband, James Hazel Whitaker; 3 brothers, Corbin Page, Arnold Page, and Walden Page; and 2 sisters, Maxine Whitaker and Louise Herskovitz. Pallbearers are Butch Atchley, Rod Coffey, Carl Glass, Ken Walls, Matt Whitaker, and Stuart Whitaker. Honorary pallbearers are Bill Bearden and Buddy West. Funeral services will be held at 2 p.m. Friday, September 23, 2016 at Grant Memorial Chapel with Bro. Clayton Tuggle officiating. Burial will follow in the Union Cemetery in Woodville. The family will receive friends Thursday from 6-8 p.m. The family requests In lieu of flowers, please make a donation to the Alzheimer's Association of Madison County, 117-A Longwood Dr., SW, Huntsville, AL 35801. Arrangements Entrusted to Grant Memorial Chapel.

Thought to be the last living member of the DAR High School Class of 1936, Helen Page Whitaker of Grant died Monday, September 19, 2016 at South Hampton Nursing Home in Owens Cross Roads. She was 98. She was born to Frank Ervin Page and Myrtle... View Obituary & Service Information

The family of Mrs. Helen Page Whitaker created this Life Tributes page to make it easy to share your memories.

Thought to be the last living member of the DAR High School Class...

Send flowers to the Whitaker family.