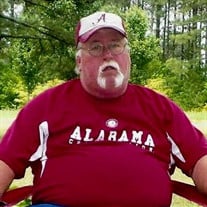 Funeral services were held Wednesday afternoon at Grant Memorial Chapel for Mr. Howard "Wayne" Long, of Grant, who passed away in the early morning hours of April 11, 2016 with his family by his side at Marshall Medical Center North.Wayne was married for 33 beautiful years to Dot Long, they shared two amazing children, Kenny (Tonya) Long and Christy (Ben)Hammers. He was proudly known as Papaw to Dylan Long, Alexis Shaw, Caden Shaw Dakoda Long, Austin Long and Callie Long.He was the baby brother to James, Mack, Hubert, Archie and John Long, Helen Driver, Edith Stewart and Loretta Rice. He is preceded in death by his parents, Euwing and Pollye Fowler Long. Wayne had a host of family and children, for the way he loved his wife, his family and his friends, Wayne enjoyed life, every moment of it. His passions were many, trips to the Smoky Mountains coaching his children and later his grandchildren, making sure we were all taken care of, let's not forget the yard sales and such he was packed and ready to go every weekend, the family get togethers his way of making us smile, his friendships, his dedication to hard work and so much more. Wayne has carved his name on many hearts he is a legacy etched in the minds of many of us and in the stories we all will share. So i ask you this, share his stories, tell his jokes,make someone smile the way he did, love the way he loved you. We would like to thank everyone for the prayers and support you have all shown in many ways to our family. A special thanks to Brother Ricky Beck, a lifelong friend of Wayne and to Brother Troy Nichols for officiating. We cant imagine how difficult it was for you both, we greatly appreciate you! A special thanks to the pallbearers, Charles Jones,Randy Jones, Jeff Teele, David Osborne, Corey Jones, Thomas Long, Tony Osborne and Nathan Jones.

Funeral services were held Wednesday afternoon at Grant Memorial Chapel for Mr. Howard "Wayne" Long, of Grant, who passed away in the early morning hours of April 11, 2016 with his family by his side at Marshall Medical Center North.Wayne was... View Obituary & Service Information

The family of Mr. Howard Wayne Long created this Life Tributes page to make it easy to share your memories.

Send flowers to the Long family.