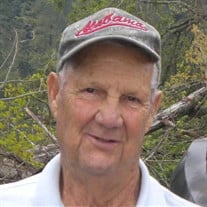 James Doke “Shorty” McBride James Doke “Shorty” McBride, age 87, of Grant, AL, passed away Saturday, July 18, 2015, at Barfield Healthcare in Guntersville, AL. He was born March 8, 1928, the youngest of seven children, to the late Andrew Doke and Emma Christa McBride in Jones Valley, Huntsville, AL. His family later relocated to Swearengin, where they farmed and operated a sawmill. He graduated from DAR High School and attended Jacksonville State University. He and his first wife, Imogene Whitaker McBride, were married for 41 years and had two children. He began working at Redstone Arsenal in missile maintenance and worked there until his retirement in the late 1980s. After the death of Imogene, he married Emma Morgan Watkins from Calhoun, GA. He and Emma were married for 26 years. He was a member of the Grant First Baptist Church. His motto was, “If you have your health, a dependable vehicle and some money in your pocket, you should travel as often as you can. There is so much to see and do and life is too short.” He lived his motto. His hobbies included raising a garden, fishing, traveling and playing cards.. Shorty is survived by his wife, Emma Morgan McBride; son, James Edwin “Eddy” McBride (Linda Corina); daughter, Regena McBride Glasgow (John); grandchildren, James Christopher McBride, Jamie Rheann Glasgow, and Janna Glasgow Weatherford (Paul); great-grandchildren, Magnolia “Maggie” McBride, Gavin Weatherford and James Weatherford; and a host of nieces and nephews. He is preceded in death by his first wife, Imogene Whitaker McBride; parents, Andrew Doke and Emma Christa McBride; brothers, Lonnie McBride (Estelle), John “Bill” McBride (Charlotte), and Sanford “Sam” McBride; and sisters, Rena McBride King (Joe), Grace McBride Kennamer (Leon) and infant Mary Lizzie McBride. The family will receive friends at Grant Memorial Chapel on Monday, July 20, 2015, 5:00 p.m. – 8:00 p.m. Funeral services will be Tuesday, July 21, 2015, 11:00 a.m. at the funeral home chapel. The service will be officiated by Bro. Clayton Tuggle and Bro. Steve Stanfield. Pallbearers are Samuel McBride, Gary McBride, Jimmy McBride, Joe McBride, Mark Kennamer, and Wabon Cameron. The service will be concluded at the funeral home.

The family of Mr. James "Shorty" McBride created this Life Tributes page to make it easy to share your memories.

Send flowers to the McBride family.