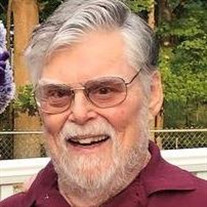 James Tellefsen, Jr., died Friday, May 10, at his home in Swearengin, Alabama. He was 85. His wife of 44 years, Martha Green Tellefsen, was at his side, and he was surrounded by the prayers and good wishes of his countless friends and family. Jim was born November 30, 1933, in Jersey City, New Jersey, to James and Anna Freudenberg Tellefsen. He attended the Cooper Union in New York City, and fulfilled his lifelong dream to become an architect. His firm, Tellefsen Mader & Associates in Teterboro, NJ, designed numerous office and industrial buildings, churches, banks and homes throughout northern New Jersey. Jim loved fishing in Long Island Sound, the Florida Keys and coastal Louisiana. He was an accomplished joke-teller and enjoyed life to the fullest. He was especially fond of laughter, classical music and cooking (and eating) delicious food. Some of his fondest memories were of traveling to interesting destinations around the world, including sailing in the Caribbean, exploring Egypt, France and Italy, and tracing his roots in Norway. He also adored, and was adored by, his 2 standard poodles, Blue and Red. He and Martha moved to northern Alabama in 1995, where he built his dream house perched on a bluff overlooking the Tennessee River. Jim was passionate about Great Expectations Ministries, a Christian drug and alcohol recovery program in Woodville, AL, where he and Martha attended church and Jim applied his architectural talents. In middle age, Jim became an EMT and served as Captain of the Hillsdale (NJ) Volunteer Ambulance Corps for several years. When they moved to Alabama, Jim and Martha went back to school and became EMT-Intermediates, and served as first responders with North Marshall EMS, of which Jim was also captain for several years. In addition to his wife, Martha, Jim is survived by his four children, Karen Tellefsen (Frank Houlihan) of Millington, NJ, Mark Tellefsen (Susan) of Savannah, GA, Linda Lewis of Swartswood Lake, NJ, and Paul Tellefsen (Anisia) of Davidson, NC. He is also survived by 8 grandchildren, Michele and Katlyn Lewis and Jessica Lewis Davey, and Ben, Maggie, James, Anna and Lauren Tellefsen; and 3 great grandchildren, Quinn Vantassel and Peter and Morgan Davey. Jim is also survived by his brother, Gerald Tellefsen (Joan Trude) of St. Petersburg, FL. He was preceded in death by his sister, Nancy DeLorenzo and his son-in-law, Gary Lewis. Jim did not want any funeral services or visitations, and desired to be cremated. At a future date his ashes will be spread at sea. If friends or loved ones wish to honor Jim’s memory, a donation to Great Expectations Ministries, 7 Rose Street, Woodville, AL 35776 would be most welcome. Arrangements Entrusted to Grant Memorial Chapel.

James Tellefsen, Jr., died Friday, May 10, at his home in Swearengin, Alabama. He was 85. His wife of 44 years, Martha Green Tellefsen, was at his side, and he was surrounded by the prayers and good wishes of his countless friends and family. Jim... View Obituary & Service Information

The family of Mr. James Tellefsen Jr. created this Life Tributes page to make it easy to share your memories.

Send flowers to the Tellefsen family.