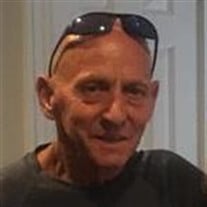 Mr. Joe Campbell gained his wings Sunday January 27, 2019. The son of Carter and Odessa Campbell, he was born April 2, 1943. He was an amazing dad to his son, Doug Campbell (Melinda) and his daughter, Brandy Campbell. He was a great Papa Joe to his grandkids Emily Campbell and Sarah Campbell. He was just like a dad to their mom, Teri and a step grandpa to Melinda’s daughter, Chelsea. He was an awesome brother to his sister, Mary Ellen Morrow and his mom’s favorite as he would tell her. From he and his dad starting the North Marshall water system in the community, to BurCamp, to a Western Auto store, to working at Teledyne, a city council man, and starting Waterfront Tackle and Grocery, he was a true business leader for many years in the Grant area. He loved fishing, hunting, Alabama football, and most of all time with his family and friends. He was both a Shriner and a Mason. He always felt closest to God when he was out with nature either on the lake or in the woods. The pride he had in watching his grandkids whether in sports, cheering, or academics achievements filled his heart. He had a huge heart that loved helping people and was the hardest working man ever seen say many of his friends. He believed in leading by example and taught the importance of hard work and dedication. After a spinal cord injury in 2003, he overcame many obstacles the doctors said he couldn’t. He loved going to the gym, continuing to doing what they said impossible, and his gym friends. As someone who cared about other, he held the distinction of being an Eagle Scout and even in death he care by being an organ donor. Funeral arrangements to celebrate his life will be Thursday, January 31, 2019 at 2 p.m. at Grant Memorial Chapel. Visitation with his family will be Wednesday night from 5-9 pm at Grant Memorial Chapel and the friends may visit with the family an hour before the service on Thursday at Grant Memorial Chapel. Burial will follow the funeral service at Free Home Cemetery. Arrangements Entrusted to Grant Memorial Chapel

Mr. Joe Campbell gained his wings Sunday January 27, 2019. The son of Carter and Odessa Campbell, he was born April 2, 1943. He was an amazing dad to his son, Doug Campbell (Melinda) and his daughter, Brandy Campbell. He was a great Papa Joe... View Obituary & Service Information

The family of Mr. Joe Campbell created this Life Tributes page to make it easy to share your memories.

Send flowers to the Campbell family.