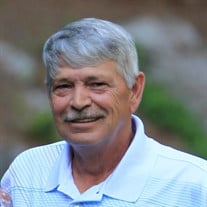 On Monday, February 28, 2022, Leonard Joe Lambert, finished his race on this earth at the age of 59. Joe was born in Boaz, Alabama on March 21, 1962. Joe was an amazing husband, father, and Papaw. He retired out of the US Army in 1998 at the rank of Staff Sergeant and moved to the Grant Alabama area with his family. Those who were blessed to be a part of his life, knew he would do anything for anyone if he was physically able. To know him was an amazing blessing, he may have been stubborn on the outside to most, but he was compassionate, caring, hard-working and so many other wonderful traits. You could always tell when he was about to tease you because he would get a twinkle in his eyes, this was especially noticeable when he was playing with his grandson. The main thing anyone ever met him could tell you, he loved his family and was proud of them. He left this Earth too soon, but he will live on in our hearts forever. Joe is survived by his wife of 41 years, Melodie Lambert; Children, Daniel (Tina) Lambert, Nonie Moran, Jennifer Lambert, and Mary Ray. Grandchildren; Owen Morgan, Austin and Cameron Connell, and Michael and Tessa Ray; and 2 Great Grandchildren, Siblings, Deborah Holland, Ray Lambert, Sue (Steve) Comeau and brother-in-law J.D. Jacks and numerous loving nieces, nephews and great nieces and nephews. Along with his parents, Mr. Lambert was preceded in death by his brother, Donnie Smith, sister Marie Cole and Brother-in-Law Alan Comeau. A graveside funeral service will be held at 3:00 p.m. Wednesday, March 2, 2022 at Free Home Cemetery in Grant. Arrangements Entrusted to Grant Memorial Chapel

The family of Mr. Joe Lambert created this Life Tributes page to make it easy to share your memories.

Send flowers to the Lambert family.