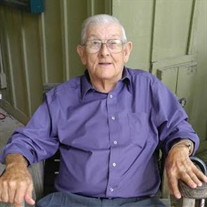 Mr. John Leonard Anderton, of Grant,formerly of Crossville, passed away on Monday, March 6, 2017, at Huntsville Hospital. Visitation for him will be on Wednesday, March 8, 2017 from, 5:00 - 9:00 PM, at Grant Memorial Chapel Funeral Home. Funeral... View Obituary & Service Information

The family of Mr. John Leonard Anderton created this Life Tributes page to make it easy to share your memories.

Send flowers to the Anderton family.