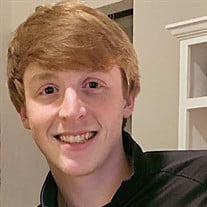 Mr. John Taylor Hill, but better known by everyone as JT, passed away Sunday, January 31, 2021 at the age of 23. JT was genuinely a one of a kind person. He was a friend to anybody and everybody who crossed his path. He would walk up with that gleaming goofy grin and you knew you were about to have the same wholesome encounter you always would with him. Even if it had been days, months, or years since you last saw each other, he acted with the same loving demeanor he never failed to put forth. He loved to make the ones around him the happiest. Not only did he have a great love for the people around him, JT also had a great love and passion for sports. He played basketball and football throughout high school. He was even an umpire for baseball and he reffed basketball games starting in high school. He cheered on the Auburn Tigers no matter what sport was playing. If he wasn't cheering on Auburn, it was UConn or the Colts. Always. He also had a hidden passion for rockets and space. He had so much knowledge on anything to do with rockets. Past, present and future. He didn't share his insight with many but if you were fortunate enough to hear him talk about all the cool things he had learned, you knew he truly so passionate about it. He shared the same kind of love for NASCAR. The video game and real life races. He loved going to the races with his mom, those days were his favorite memories. He loved so many things and people so strongly, but nothing compares to the love he had to his mother, his best friend, Karla. His mom was his biggest supporter throughout his life and never let him go at anything alone. He always knew that tomorrow was gonna be a brighter day and he would never let you forget it either. He was the best support system and he was this was because that's how he was raised. JT was such an amazing friend, son, grandson, brother and uncle. He loved so hard and will never be forgotten. He is survived by his father, Derek Hill; mother, Karla Hill (Russ Abrams); his sister, Sarah Bryant (Jarrod); his niece, Wylie Kate Bryant; step-sisters, Rachael Abrams and Ashley Dicks (James); step-niece, Evelyn Dicks; his grandparents, Ann Taylor and James & Bobbie Hill; aunt; Melanie (Tim) Ryan; uncles, Daniel (Amandiy) and Adam (Ashley) Hill; and cousins, Graham (Tina) Ryan, Rebecca (Eddie) Cloud, Elizabeth Hill, Adam Hill, Kaylin Hill, Chloe Hill and Ethan Hill. He was preceded in death by his grandfather, Billy Jack Taylor; and his great grandparents, Wylie Pierson & Dolly Johnson. JT’s family will receive friends from 5-8 p.m. Friday, February 5, 2021 at Grant Memorial Chapel. A funeral service celebrating his life will be held at 2 p.m. Saturday, February 6, 2021 in the Grant Memorial Chapel with Chad Hancock and Kenny Downs speaking. Tanner Fox, Nick Burton, Seth Warren, Michael Havis, Brandon Perez, and Ryan Mock will serve as pallbearers. Burial will follow in Free Home Cemetery. Arrangements Entrusted to Grant Memorial Chapel

Mr. John Taylor Hill, but better known by everyone as JT, passed away Sunday, January 31, 2021 at the age of 23. JT was genuinely a one of a kind person. He was a friend to anybody and everybody who crossed his path. He would walk up with... View Obituary & Service Information

The family of Mr. John Taylor “JT” Hill created this Life Tributes page to make it easy to share your memories.

Mr. John Taylor Hill, but better known by everyone as JT, passed...

Send flowers to the Hill family.