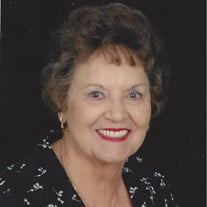 Julia Mae Campbell Tucker passed away unexpectedly on Monday, July 3, 2017. She was 78 years old. She is survived by her daughter, Teressa Tucker Castro (Ed) of Greenville, South Carolina; grandchildren, Nicholaus and Cali Elizabeth Castro of Greenville, South Carolina; sister, Geraldine Kirkland of Grant, Alabama; and brother, Claude Campbell (Dot) of Hampton Cove, Alabama. Mrs. Tucker is also survived by a brother-in-law, Travis Tucker (Judy); sisters-in-law, Betty Burroughs, Helen Tucker, and Olympia Tucker; and a host of nieces and nephews. She was preceded in death by her parents, Zelma "Zet" and Jerdon Campbell and brother, James Campbell. Mrs. Tucker was born on March 23, 1939. She was a lifelong resident of Grant, Alabama and attended KDS DAR School. Mrs. Tucker was a member of the Grant Church of Christ. Julia and Billy Tucker married in September 1955. She worked many years as a homemaker, raising their two children, Donald and Teressa. In 1978, Mrs. Tucker began work at the Community Action Agency, serving the people of Grant. She became known throughout the community as someone to turn to for help. Mrs. Tucker remained with Community Action for 25 years until the Grant agency closed. Mrs. Tucker enjoyed her flowers, quilting, sewing, and telling a good story. Julia will be sorely missed by all who loved her. Funeral services will be held at 12 noon Saturday, July 8, 2017 at Grant Memorial Chapel with Clayton Tuggle and David Powell officiating. Burial will follow in Free Home Cemetery. The family will receive friends from 11 a.m. until time of service. The family will accept flowers, or donations may be made to the American Heart Association. Arrangements Entrusted to Grant Memorial Chapel.

The family of Mrs. Julia Campbell Tucker created this Life Tributes page to make it easy to share your memories.

Send flowers to the Tucker family.