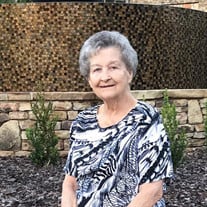 On January 31, 2019, Margie Bell Smith’s golden heart stopped beating and her hard working hands came to rest to take on heaven’s reward of beauty and peace. She was a life-long resident of Grant, AL and turned 86 years old on January 21, 2019. She is preceded in death by her loving husband, William Henry Smith, her parents, Thomas Jefferson and Mattie Lubie Davis, two brothers, Robert Davis and Kenneth “Bud” Davis, two sisters, Mae Weltzer and Alberta Chambless. She is survived by her brother Jimmy Davis and sister Shelby Kennamer. She was blessed with four daughters Donna Lannom (Paul), Jo Ann Dennis, Pat Smith (Sheri) and Vicki Dunnam (Dennis), seven (7) grandchildren, 9 great grandchildren and 1 great great grandchild. She worked at Arrow Shirt Factory in Albertville, AL from 1966 to 1975, was plant supervisor at Grant Manufacturing from 1975 to 1986 and retired in 1998 from DAR School as assistant lunchroom manager after 11 ½ years. She was a member of the Gunter Mountain DAR chapter. She was the strong backbone that carried her family and was a true example of a Proverbs 31 woman. Happiness and taking care of others were a big part of her life. Her home was always an open door filled with warmth, love, and the aroma of good food. She had an extraordinary ability to show love to everyone around her. She was an accomplished seamstress and after retirement, she spent many hours quilting and sharing those with family and friends. Her Saturday morning passion was yard sales, going to thrift stores and flea markets. The simple things of life is what she enjoyed most. Pallbearers are Chuck McWhirter, Josh Woods, Tyler Dennis, Josh Hall, Jeremy Dunn and Julian Hall. Honorary pallbearers are Jason Carnes, Ronnie Carnes, Kenny Davis, Vince Davis, Skeeter Davis, Gerald Dunn, and Terry Kennamer Funeral services will be held at 2 p.m. Sunday, February 3, 2019 at Grant Memorial Chapel with Bro. Leon Castle officiating. Burial will follow in Free Home Cemetery. The family will receive friends from 5-8 p.m. Saturday at Grant Memorial Chapel. Arrangements Entrusted to Grant Memorial Chapel.

On January 31, 2019, Margie Bell Smith&#8217;s golden heart stopped beating and her hard working hands came to rest to take on heaven&#8217;s reward of beauty and peace. She was a life-long resident of Grant, AL and turned 86 years old on January... View Obituary & Service Information

The family of Mrs. Margie Bell Smith created this Life Tributes page to make it easy to share your memories.

Send flowers to the Smith family.