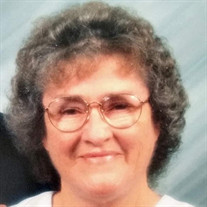 Sadie Lorene Walls selvage passed away Wednesday, May 6, 2020 at Barfield Health Care, where she had resided since January 2017. She suffered a stroke on August 31, 2016. She was 86 years old. She was born on August 28, 1933 in the Swearengin community of Marshall County, the daughter of Bert and Amanda Walls. They later bought a farm at Grant, in the area where Foodland and Town Hall are currently located, and built a home. The house is still there, located next to Porky's BBQ. Later when the sons went into the military and couldn't help farm, they sold and moved to Huntsville in 1951. Her parents passed away in the 1980s. She and Minzo C. (M.C.) Selvage were married in 1949 and joined New Home Church of God in 1950. He was a water well driller for 66 years and passed away December 2, 2018. They had been married for 69 years. Sadie worked at several places including Elmore's, Weaver's, and Hammers in Guntersville. She plated piano for New Home Church and many years ago she went with the church quartet to sing at funeral and singings. She also taught Sunday School classes. She and Minzo loved going to the Smoky Mountains each year on their anniversary. Their last trip there was with family-Debra and Sharon-in 2015. They all had a good time, especially the grandchildren who she loved dearly. In 1999, she and Minzo and Debra and Joe went to Yorba Linda, California to visit her daughter Teresa and family. A private graveside service will be held for her family at Free Home Cemetery. Her nephew, Rev. Larry Walls will officiate her service. She is survived by her daughters, Debra Wood (Joe), Teresa Hunter (John), and Sharon Pendergrass (Michael); granddaughters, Amy Vermillion (Rob), Morgan Pendergrass, and Madison Pendergrass; grandson, Lucas Pendergrass; great grandson, Noah Vermillion; several step-grandchildren; and her brother, Houston Walls. She was preceded in death by her husband, Minzo C. Selvage; parents, Bert & Amanda Walls; sister, Bessie Troup; brothers, Authur, Herman, and Chester Walls; and special nephew, Rev. O'Neal Walls. Arrangements Entrusted to Grant Memorial Chapel

Sadie Lorene Walls selvage passed away Wednesday, May 6, 2020 at Barfield Health Care, where she had resided since January 2017. She suffered a stroke on August 31, 2016. She was 86 years old. She was born on August 28, 1933 in the Swearengin... View Obituary & Service Information

The family of Mrs. Sadie Walls Selvage created this Life Tributes page to make it easy to share your memories.

Send flowers to the Selvage family.