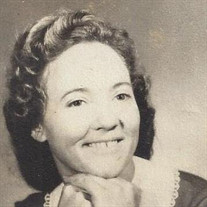 Mrs. Redia Sue Pritchett Shadden, age 81 passed away Thursday, October 5, 2017 at her home in Grant, AL in the Swearengin Community. Sue was born March 22, 1926 in Alabama to the late Gladys Guffey Pritchett and the late Leroy Prittchett. She... View Obituary & Service Information

The family of Mrs. Sue Pritchett Shadden created this Life Tributes page to make it easy to share your memories.

Send flowers to the Shadden family.