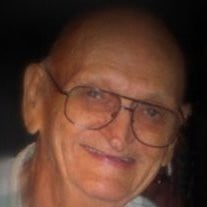 Waymon Earlene Henson died on July 31, 2013 at age 83, following a massive stroke. He loved his family, friends and his garden. Alabama lost one of its most extraordinary citizens, and the world lost a tower of a man. Known to thousands, and loved by all of them, he spent most of his well-lived life in Grant and his death is a great loss to all that knew him. Earlene was born in Albertville on September 5, 1929. He grew up in Grant where he attended school through the 7th grade. He was a very intelligent and passion-filled man full of love for his family and his friends. He had a gift, a raw talent. He could sit down and talk to anyone, be it a head of state, doctor, lawyer, president or simply the next-door neighbor. He hadn’t been educated necessarily by the school system, but by life itself. No one will ever forget the meaningful stories that he recounted about his life- all the places he’d traveled and lived, jobs he had, people he worked with, his garden, and most of all his family. Earlene lived the type of life that we all can look up to and only pray and hope to aspire to ourselves. The words hard worker, kind, honest, just, and gentle is only the beginning when trying to describe him. He loved his garden. This is where he spent most of his time. He enjoyed planting vegetables and fruits. He would plant enough for the entire family. Anyone who came to visit, he insisted they take fresh tomatoes, corn, and peppers with them. If he didn’t have vegetables he always had his famous Hot ketchup, preserves or pecans. We are so proud to be able to say we knew him and even prouder that we were related to him. Earlene is survived by the love of his life, wife of 63 years, Carrie Jo Rollings Henson, his daughter Cathy (Tim) Mayhall, son Terry Henson, four grandchildren, Chad Brown, Cory Brown, Amanda (Mike) Warren and Jessica (Matt) Miller, 6 great-grandchildren Seth, Chris, Wesley, Makenna, Jaylyn and Tyson, 2 brothers, Joe (Betty) Henson, Sam (Melba) Henson, sister-in-law Pat Henson and brother-in-law Elvin Kennamer. He is preceded in death by his mother and father, Vera and Bama Henson, brothers, Randy, Bama Jr. and Byron Henson, sisters Louise Parker and Marie Kennamer. Waymon Earlene Henson became disabled, while on active duty, just shortly after joining the Army. He was a member of the local Plumbers/Pipefitting Union 377, and retired after 45 years.

Waymon Earlene Henson died on July 31, 2013 at age 83, following a massive stroke. He loved his family, friends and his garden. Alabama lost one of its most extraordinary citizens, and the world lost a tower of a man. Known to thousands, and... View Obituary & Service Information

The family of Waymon Earlene Henson created this Life Tributes page to make it easy to share your memories.

Send flowers to the Henson family.